Since last year, the domestic LED market has suddenly become extremely optimistic. Domestic and overseas investment and mergers have accelerated the process of integrating upstream and downstream enterprises. State-owned capital and private capital have also entered the industry and there has been an upsurge in industrial investment. Traditional lighting companies have even spotted this piece of treasure that has not been fully developed, and have been flooding the market with various kinds of LED lighting products.

However, when reporters took the lighting show again this year, they obviously felt a lot more convincing than last year's major lighting giants' attitude toward LED, and more they turned the direction of the promotion back to energy-saving lamps. â€œLast year we focused on LED, because according to national policies and future developments, LED light sources are more energy-efficient, so last year we were led by LED light sources. This year we have converted, LED still has many Mature things, we also have to tell consumers, LED advantages and LED's current shortcomings, so our focus is still dominated by energy-saving light sources." NVC Lighting Lighting Director said in an interview with Sina reporter.

From the past rush to the current dilemma, such a big shift shows that the lighting companies have clearly realized through their own practice that the LED market is not a good bone.

Reason: The technology is not mature enough and the overall market is chaotic

According to last year's random inspection results for domestic LED lighting, the domestic LED's luminous efficiency is lower than that of energy-saving lamps, and the color rendering is poor. Because the chip accounts for a high proportion of the LED product cost, China's lighting-grade high-end LED chips mainly rely on imports, and the price is relatively expensive. As a result, the price of LED lighting products with the same lightness is high, so the cost performance is relatively mature. The energy-saving lamps are not attractive to ordinary consumers.

In addition, the threshold of the LED lighting industry itself is very low. At present, there are 1950 LED packaging companies in China, and any enterprise can do it. Do a showroom, rent a small factory, hire a few workers, and buy an accessory is an LED factory. As a result, the fisheye phenomenon on the market is serious. Many LED energy-saving lamps even promised consumers to save 100,000 hours of light, but according to industry sources, the actual packaging technology is now very good for 20,000 hours, and it is impossible to achieve a luminous time of 100,000 hours. . The vast majority of LEDs currently circulated on the market are less than 50 watts, which is lower than the number of energy-saving lamps, and they have lost their main advantages.

For the core competitiveness of the terminal without technology, the price can not be reduced; facing the market is also facing a serious impact on the industry with inferior goods. As a result of such an attack by the enemy, the traditional lighting giants are unable to gain a leading position in the LED's starting.

It is understood that the 2012-2014 global incandescent light cut-prohibition policy will be implemented in order, making incandescent lights gradually disappear in the market after 2012. It is expected by industry insiders that LED will enter the lives of the people in an explosive manner after about three years. â€œThe industry is also constantly reshuffling, allowing guests to purchase test equipment from the original six or seven years ago without knowing the LED products. Now it may be possible to purchase certain patents with foreign brands as soon as the price comes down. More masses of ordinary people are able to accept such products.â€ Toshiba Lighting Shanghai executives are also optimistic about the development of LED in the next few years.

However, it is an indisputable fact that the industry has encountered bottlenecks in the golden period. A bottleneck can only be eaten when a good cake is eaten, and throwing it out is a pity, a tasteless tasteless rib. According to Zhang Renyu, vice president of Simon Electric (China) Co., Ltd., â€œLEDs may bring a new starting point to more businesses. It may be that you did traditional lighting before, you have advantages in traditional lighting, but you enter new ones. When the technology platform LED, in fact, every company is the same, no one has advantages over others, what's the next advantage is that all the lighting companies are at a new starting point, what kind of attitude, what kind of Way to face."

The Preformed Helical Fitting is mainly used in wire,ground wire installed hardware. According to the performance of the structure can be divided into:

1.Preformed Suspension Clamp:used to hang the conductors and ground wires on the perch.

2.Preformed Strain Clamp:bears all tension,connect the wire and ground wire on the tension tower 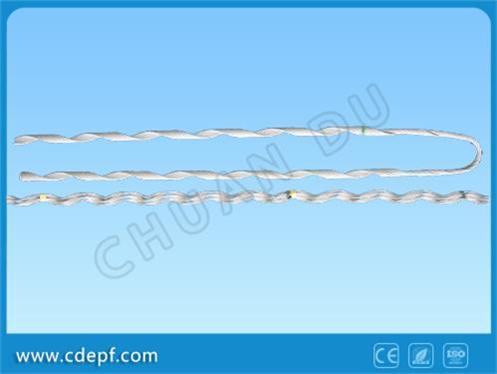