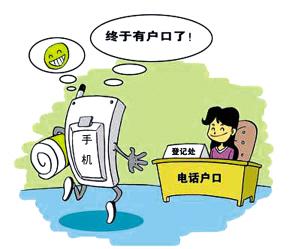 The real name of the mobile phone reduces the information nuisance machine of some people from the source. With this layer of intangible constraints, information promoters and scammers will not be so embarrassed.

The latest data shows that Chinaâ€™s mobile users have exceeded 1.1 billion, which is an era when people cannot leave their mobile phones. For many people, without a mobile phone, life will face certain difficulties. When the phone is not around, it becomes a little restless.

When mobile phones have such a high â€œviscosityâ€ for people, it is not hard to imagine how many nuisances will be caused to people by spam messages, marketing calls, and fraud information. It can be said that in the face of these short messages and calls, all people will look at and hear the information prompts, but everyone has no choice but to hang up after listening to them.

For some promoters, this kind of "impolite" hang-up will also suffer harassment. I once said to the caller that "no need, thank you," that is, hang up, do not want to call back, can not answer the call again, the other side said, "Sir, I think you need!" Once again hang up again In case of an incoming call, if the person is unable to work, they can remember that they can turn off the ringtone and let it be boring.

According to the report of China Network Bad News Reporting Center, the average number of short messages received by mobile phone users in the second half of 2012 was 10.7. However, for those mobile phone users whose personal information is leaked, the daily spam and sales calls may reach ten times. When hundreds of millions of mobile phone users are trapped in the spam environment, the quality of this information life is actually somewhat poor.

There are many ways to prevent the public from being harassed by spam, but the most effective method is still rigid legal protection. The National Peopleâ€™s Congress has made legislation on the protection of network information. Beijing is about to issue regulations on management of mobile phone real-name systems. The purpose is to establish a protective system for the public.

The real name of the mobile phone has the same benefit. It is to reduce some people's information nuisance machine from the source. When they realized that the frequent information harassment would face the public's accusation and the relevant departments would promptly ask for advice, they would face two options, either stop harassment or pay a price for it. With this layer of intangible constraints, information promoters and scammers will not be so embarrassed.