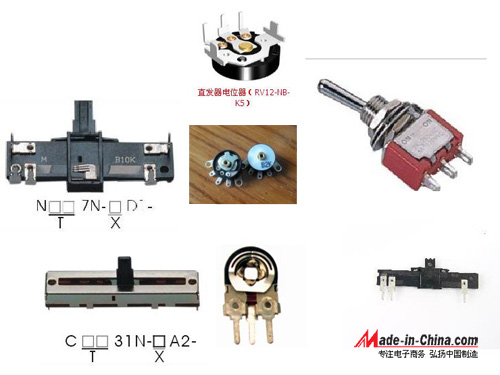 Potentiometer is a kind of adjustable electronic component. Its English word is rheostat. Rheostat consists of a resistor body and a rotating or sliding system. When a voltage is applied between two fixed electric shocks of the resistor body, the position of the contact on the resistor body is changed by rotating or sliding the system, and a position of the movable contact can be obtained between the movable contact and the fixed contact. Certain relationship voltage. Potentiometer is essentially a sliding rheostat, there are several styles, generally used in the speaker volume switch and laser head power size adjustment.

The earliest potentiometers date back to the Wheatstone variable resistors of 1843, which are used primarily to regulate or control the current.

In the 20th century, radio appeared in the 1920s. Under the guidance of electron-based electronic devices, variable resistors or potentiometers had a synthetic carbon film type and wirewound type, in which the wirewound potentiometer was able to dissipate large power and High reliability in high voltage circuits.

In the 40's, precision potentiometers with precise linear laws were developed and used exclusively for electronic analog computers.

Wirewound potentiometer: with high precision, good stability, low temperature coefficient, reliable contact and other advantages, and high temperature resistance, power load capacity. Disadvantages are that the resistance range is not wide enough, the high frequency performance is poor, the resolution is not high, and the high resistance value of the wirewound potentiometer is easy to break, the volume is larger, and the price is higher.

Synthetic carbon film potentiometer: It has the characteristics of wide resistance range, good resolution, simple process and low price, but it has large dynamic noise and poor moisture resistance.

Metal glass glaze potentiometer : It has the advantages of organic solid potentiometers, and its ability to withstand temperature, humidity, and load impact has been improved, and it can work reliably under harsh environmental conditions.