The proportion of attention paid to 3D LCD TVs in the LCD TV market this month reached 42.6%, which is still on an upward trend, showing that the 3D LCD TV market is very popular. In June 2012, the pattern of brand awareness in China's 3D LCD TV market was relatively large and the competition was fierce. Samsung replaced Hisense to win the brand's attention list championship and the development momentum was good. LED backlight type large-size screen products are still receiving attention. The Internet Consumer Research Center ZDC concluded that the brand and product data of the Chinese LCD TV market in June 2012 will be analyzed:

â€¢ The brand is concerned about the pattern: The brand's attention to the pattern has changed greatly. Samsung replaced Hisense to win the championship. Hisense has dropped one runner-up and Konka's popularity has risen slightly.

â€¢ Product Focus: The Sony KDL-55HX920 has become the most popular product for consumers; LED backlight types and large screen size products have attracted much attention; the price range of 5001-8000 yuan products has become popular.

â€¢ Case Study: Hisense has the largest number of products on the market and the proportion of concerns has slowly increased.

First, the brand attention pattern â€¢ Samsung replaced Hisense won the championship this month's 3D LCD TV market, Samsung replaced Hisense won the championship, concerned about the ratio reached 16.1%. Hisense dropped one place to the second place and the proportion of attention decreased to 15.7%, a decrease of 2.5% from May. Skyworth maintains its third place with a 13.9% interest rate, and the proportion of attention has dropped slightly. The competition among Samsung, Hisense, and Skyworth's top three brands is fierce, and the pattern of brand attention will change every month. This shows that the 3D LCD TV market has a good development prospect. Major manufacturers are vigorously developing their 3D products.

â€¢ The popularity of Konka has risen slightly. Compared with May, the proportion of attention of Konka in the 3D LCD TV market this month has increased by 3.4%, and brand awareness has risen by two positions, showing that the popularity has risen slightly. The proportion of TCL and Sharp's attention has been reduced, and both have dropped by one. In addition to the position of the runner-up in the championship, in addition, the rest of the brands concerned remain in place unchanged. 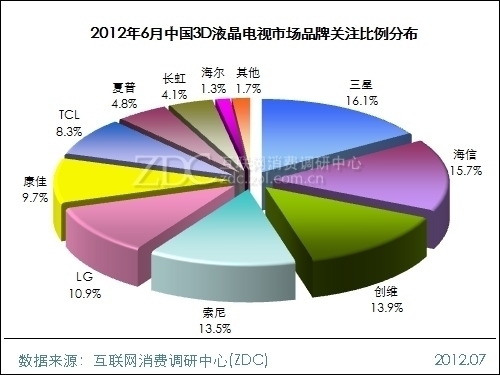 â€¢ Single-product concern changes in the list This month, the 3D LCD TV market has a big change in the single-product watch list. There are five new products on the list, including two Sony models, two Konka models, one Sharp model, and Sony KDL-55HX920. Newly placed on the list to win the championship, this 55-inch LED backlight type product is priced at 1,999 yuan, such a high price has attracted much attention, showing its excellent performance. It is worth mentioning that the ninth Sharp LCD-46LX830A on the new list had a price drop of 700 yuan compared with May prices. It can be seen that its substantial price reduction has attracted the attention of many consumers.