Because of its unique design and new technology, the CAN bus has outstanding reliability, real-time performance and flexibility compared with the general communication bus. CAN uses multi-master working mode, low cost, and has a very high bus utilization rate; CAN bus has a reliable error handling and error detection mechanism, using a short frame structure, short transmission time, low probability of interference; non-destructive Bus arbitration technology, the node has an automatic exit function in the case of serious errors.

In 1998, Audi, Motorola, BMW, DaimlerChrysler, VCT, Volvo and Volkswagen jointly proposed a new type A bus [3-5]-LIN (Local Interconnect Network). LIN is a low-cost, short-distance, low-speed network. It is designed to transmit status changes such as switch settings and sensor inputs, and respond to such changes. Therefore, it is only suitable for low-speed events that do not require high transmission time. Not suitable for high-speed events such as engine control.

The LIN bus has its unique characteristics. It has low cost and is based on the universal UART / SCI interface; the transmission rate of LIN can be as high as 20Kb / s, and the bus length can be up to 40m; using a single master multi-slave mode, no bus arbitration is required; Self-synchronization can be achieved without the crystal oscillator and ceramic oscillator clock in the slave node: the propagation time of the deterministic signal can be calculated in advance; the node can be added or deleted on the network without changing the hardware and software of the LIN slave node.

The communication network of the whole vehicle system is mainly based on the CAN bus, supplemented by the LIN bus. CAN and LIN are combined with each other in the automobile communication network to jointly construct the communication network of the whole vehicle system. The various control systems on the car are sensitive to the transmission delay of network information, such as engine control, gearbox control, airbag control, ASR / ABS / ESP control, traction control, etc., which have high real-time requirements for network information transmission and require high speed CAN bus, its transmission rate is up to 500kbps ~ 1Mbps; air conditioning control, instrument control, wiper control, lighting control, door and window control, etc. need to use low-speed LIN bus, and its transmission rate is 20kbps. The low-speed LIN bus does not have high requirements for real-time information transmission, but there are a large number of subsystems. Separating these low-speed subsystems from high-speed subsystems is helpful to ensure the real-time nature of high-speed subsystems while reducing costs. Based on the above considerations, the topology diagram of the CAN / LIN bus network of the entire vehicle is shown in Figure 1.

The CAN and LIN buses are independent of each other, and data sharing and data exchange are performed through the main controller (CAN / LIN gateway). The main controller is also the core of the vehicle management system. Its main function is to analyze and process various information and issue instructions, and also to coordinate the work of various control units and electrical equipment of the car.

There are many CAN nodes and LIN nodes in the CAN / LIN network, and they realize data communication between the CAN / LIN network through a CAN / LIN interface gateway. The CAN / LIN bus interface design is shown in Figure 2. Through the CAN / LIN bus interface, CAN and LIN data can be converted between each other through the central controller. When the LIN data frame needs to be transmitted to the CAN network, the controller gateway receives the LIN bus After the data frame, the LIN identifier will be converted into a CAN identifier, so that the data is transmitted from the LIN bus to the CAN bus, otherwise the data can also be transmitted from the CAN bus to the LIN bus.

The system uses PCA82C250 as the interface between the CAN controller P87C591 and the physical layer bus to provide data transmission and reception to the bus. Using PCA82C250 can also improve the anti-interference ability of the system, protect the bus, reduce radio frequency interference, and achieve thermal protection. 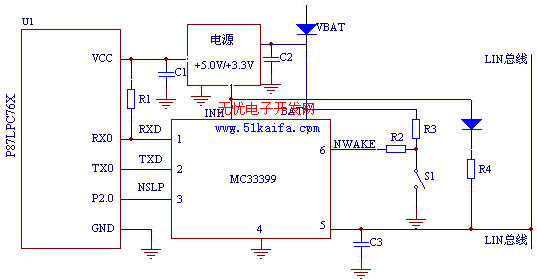 Figure 4 is a schematic diagram of the LIN bus node circuit. The hardware interface circuit of the LIN node mainly includes the microcontroller P87LPC76X, the LIN transceiver MC33399 and the power supply adjustment circuit. P87LPC76X adopts 80C51 accelerated processor structure, and the instruction execution speed is twice that of standard 80C51MCU. The microcontroller sends data from TX0 to TXD of MC33399, and RXD of MC33399 sends data to RX0 of microcontroller. This circuit adopts Wake pin input switch wake-up mode, in which 5V external voltage regulator is controllable. Since the circuit integrates a resistor and a series diode between the LIN pin and the power pin, the bus slave node does not require other external components. But for the master node, you must add an external resistance, and a diode should be connected in series to prevent the MC33399 from supplying power through the bus when the battery is powered off.

At present, the CAN bus has been applied to many automobiles as a reliable automobile computer network bus, and many scholars and manufacturers in China are also researching and developing the domestic CAN bus. Compared with CAN, LIN has a lower cost and can be used as a replacement for low-speed CAN bus. It is also used in automotive bus control.


Built-in storage battery and charger, equipped with the function of over-charge and over-discharge protection and capacity display. It is used as working power supply for lightings, communications, laptops, and special instruments of emergency working, field working, press interviews, special vehicles and other fields.