NVC Lightingâ€™s Secretary-General Tan Ying emphasized that the main purpose of this adjustment is to strengthen the management of NVCâ€™s lighting board, which will not have much impact on daily operations. â€œWu Changjiang himself also agrees with the adjustment planâ€. Wang Donglei told the Southern Reporter that this adjustment reflects the balance of shareholders' interests and is also in line with the governance requirements of listed companies. 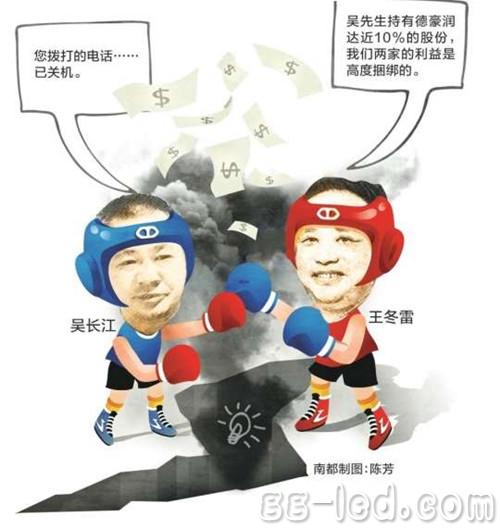 Undoubtedly, with the NVC subsidiary "changing the door", Wu Changjiang's own control over NVC lighting is further weakened, and open and transparent management of listed companies is not a bad thing.

"Wu Changjiang himself agreed to adjust"

The announcement shows that Wu Changjiang has withdrawn from the list of directors of several NVC lighting subsidiaries such as Huizhou NVC, NVC Lighting (China), WorldCom Investment, and Hong Kong NVC, and Wang Donglei took over as chairman or director of the above company. .

"This adjustment is to strengthen the management of NVC's lighting board, so that the subsidiary can better implement the resolution of the upper board." NVC Lighting Director, said that the NVC lighting board has made relevant adjustments after full deliberation.

Why does Wu Changjiang, who regards NVC as â€œlifeâ€, withdraw from the board of directors of the subsidiary company, â€œspreading a sleeve and not taking a cloudâ€? Tan Ying stressed that Wu Changjiang is also the executive director and CEO of NVC Lighting. "These adjustments have not been affected by Wu Changjiang's own consent and will not have much impact on daily operations."

"No one can absolutely control NVC"

At the end of 2012, Dehao Runda announced that it has obtained a total of 20.55% of NVC Lighting through its wholly-owned subsidiary Dehao Runda International (Hong Kong) Co., Ltd. at a total price of approximately RMB 1.343 billion, becoming the largest NVC lighting company. shareholder.

"Since Dehao Run has become a major shareholder of NVC, there have been rumors about me and Wu Changjiang (No). In fact, Mr. Wu and I are doing business in partnership, NVC is good, Dehao Runda is also good. Mr. Wu holds nearly 10% of the shares of Dehao Runda, and the interests of our two companies are highly bundled.â€ Wang Donglei said that nearly 70% of LE D chips added by NVC this year will be supplied by Dehao Runda, while Dehao Runda also sells NVCETI light source through NVC, and the sales target for this year is 800 million yuan.

According to the announcement of Dehao Runda on June 13, Wu Changjiang holds 130 million shares of Dehao Runda, with a shareholding ratio of 9.31%, which is the second largest tradable shareholder, second only to Wuhu Dehao Investment Co., Ltd. 24.73% Shareholding.

â€œWe (Dehao Runda) entrusted Mr. Wu to operate NVC Lighting. NVC Lighting is a listed company. All things must be handled according to the procedures and regulations of the listed company. No one can absolutely control NVC.â€ NVC does not The high-ranking heads who wish to be named stressed to the south.

Nandu reporter repeatedly called Wu Changjiang to display the shutdown. Wu Changjiang's latest Weibo is a group visit to the UK on June 20. "I was fortunate to witness the Prime Minister's visit to the UK, which was very successful and highlighted the status of a big country." Since then, Weibo has not been updated for nearly a month.